If I’m not mistaken, the scalar function whose level sets are computed by the function

It think it would make a great new feature of MMG3D (and the other flavours as well) if one could instead provide a callback function that mmg will call wherever necessary — not just mesh vertices – to get the scalar level value. The proposed signature is

– just the same as the original one, but the middle argument is a callback function that maps x, y, z to the level value.

Can mmg level-set multiple level functions at once? If yes, the middle argument would look a little more complicated. (If not, that would be another feature request?)

Would such a function MMG3D_mmg3dls be hard to implement, and would that implementation make it possible for the library user to provide just a bounding box mesh and the distance-to-surface function and let mmg3dls do all the geometry resolution on its own

?
The actual question is if that functionality is actually somehow present in mmg already, or if it would require some fundamentally new meshing algorithm?

Mmg allows only on level-set function at a time so your prototype of callback function would be suitable.

During all the process, the level-set values may be slightly modified to ensure:

If we suppose that the user can provide the definition of the level-set, the function can be anything, so:

As a conclusion, If your input bounding box mesh has a resolution linked to your implicit function you will not have different results with Mmg if you provide the definition of the level-set function than if you provide its discretization at nodes. If you want to provide an input mesh whose resolution is not linked to your implicit function, you will not be able to manage it with Mmg (and I don’t think that you will find a software able to produce simulation meshes in a robust way).

Sorry for the long answer but it was an interesting question that required some thought ;-).

Thanks a lot for the detailed answer, @Algiane.
I’m only thinking of the case where the surface is represented in a CAD program – for instance as a NURBS surface or whatever – , and the level function is its signed distance function. This is the approach you suggested here , if I understand correctly. In that case, if two vertices v, w are at distance || v-w || apart from each other, the level function f can only vary by the amount |f(v) - f(w)| \le ||v - w || by the triangle inequality (it is Lipschitz-continuous with Lipschitz constant 1). So, if |f(v)| > || v-w || or |f(w)| > || v - w || then f can’t be zero on the interior of the edge. So, in that case, mmg would not have to bother with querying the level function on the interior of the edge, or subdividing that edge.

In any case, I see there are good reasons why the level function should only be given at the vertices, I’m totally fine with that.

On the practical side, here is a simple example C program. Let’s take the unit ball to serve as an example of a solid given in a CAD program. It more-or-less works acceptably - iterative refinement where in each iteration, the distance to the surface is evaluated at the vertices, and then mmg is asked to refine it according to the distance function. The only problem is that there are small areas where the number of vertices explodes, disregarding the hmin setting. Unfortunately this explosion of vertices makes the result very hard to use for FEM - some tetrahedra have a very bad quality. See the screenshot below. Is that related to the oscillation problem you mention? It would be extremely cool if you had an idea how to improve the program, or point me to the place in the mmg source code where those excessive divisions occur.

If this level set approach is unusual, what is the recommended approach to generate a tet mesh of the interior of a solid given in CAD? Let’s assume I want to stick to mmg, not use other meshers. The following already works quite ok. 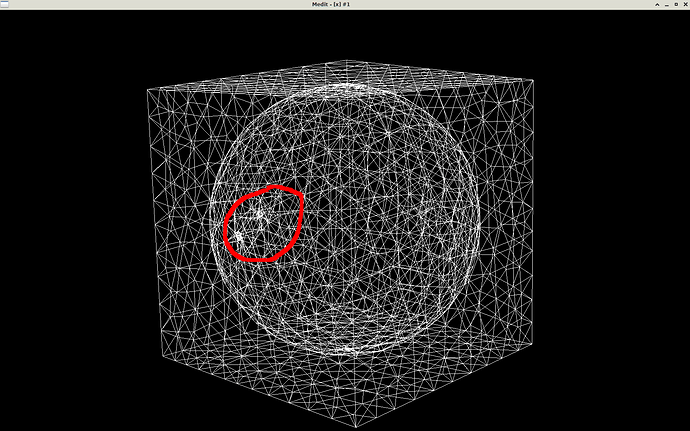 Screenshot_2022-09-01_12-43-311680×1050 112 KB
(In reality, the problem is similar but worse - there are different materials in the model, each material being a solid. I have to run this iterative procedure for each solid so that in the end each tetrahedron is inside one and only one solid. Vertices on the surface of one solid should not be destroyed by level-setting the distances to the other solids, so they have to be set “required”).

Don’t get me wrong, mmg is really doing an amazing job here. Maybe the “local explosion problem” can be solved with some Gaussian or Laplacian smoothing?!

Thank you for the mathematical explanation. I guess that the Lipschitz-continuity is a property of the signed distance function?
Even if mainly developped for the discretization of a level-set of signed distance function, the ls option of Mmg can be used on other kind of discrete data (bathymetry for example).
In a totally non-mathematical point of vue, the issue I was afraid to face with a continuous function is the one described in the attached picture (it is direcly linked to the transition from the continuous to the discrete domain): with discrete data, it is clear that we will not know that the red edge has to be splitted, with continous data, the user can expect Mmg to split twice the edge… 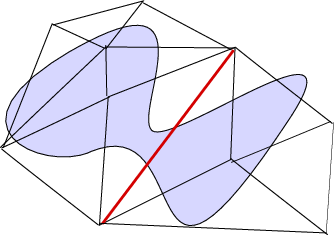 But maybe such a function definition doesn’t make sense?

The issue you have is that Mmg adds feature edges (non-manifold ridges) at the intersection of the discretized level-set and the bounding box. Once added, Mmg keeps these edges and accumulates them as the level-set evolves.

I have modified your program with a temporary solution:

I know that it is not perfect because it adds I/Os: I will try to isolate the level-set cleaning (done only when parsing a mesh file for now) and to add a call to this cleaning to the MMG3D_mmg3dls function as soon as possible (it should be transparent from the user point of vue).
Maybe the adding of some API functions to manually delete edges from the mesh can be useful.
Do not hesitate if you have another suggestion.

Thanks for the answer, @Algiane !

for any two points v, w in their domain. For signed distance functions, they can set K=1, and for bathymetry data, K can be chosen as the maximum occurring steepness of the sea floor!
If the level set function is differentiable, they can choose K = max( || \nabla f ||) , the maximal steepness. I think it would be fair to ask that much “collaboration” from the user because a non-Lipschitz continuous level function would be really nasty anyway.
If mmg knows K, then it can decide whether there’s a chance f - f_0 has two or more zeros on the interior of an edge even though it doesn’t change sign on the edge’s vertices, as in your graphic. Here, f_o is the value of MMG3D_DPARAM_ls. So, it would have to subdivide the edge only if either |f(v)| or |f(w)| is less than K || v - w || and this should not occur very frequently. So, mmg could subdivide only the pathological edges as in the graphic, without having to query the level function excessively.
Ideally, this feature would allow to write the meshing strategy without a loop.

The issue when you disable angle detection is that you have to provide manually the ridges along the bounding-box. Thus :

Thanks for the explanation.
Level set-functions might not always be smooth (infinitely differentiable). For instance, the “medial axis” which is used in shape recognition is the locus where the SDF is not differentiable, see for instance here. One can only safely assume it is continuous, or better and slightly stronger … Lipschitz-continuous (sorry to bother with that again.) I have no idea if you need continuity or smoothness for that sharp angle detection?
I guess, for now, in light of the example code, the only feature that is needed to use mmg for meshing 3d solids defined by enclosing surface meshes is to clear a mesh and reset a mesh to the state as if it was saved to read in again from a .mesh file as you do in the script:

Thanks for the explanation : I probably confused it with the levet-set of the signed distance function. I think that we need continuity for sharp angle detection. In practice we can always detect sharp angles along the level-set but smooth functions intrinsically must not have sharp angles so what we detect in this case are artifacts.

Your workflow description is correct!

Ok, do you think it would be possible to add a function to the 3d API that has the same effect as these four steps, so that one doesn’t need I/O?
I think that would be at least as useful as a new function to delete edges.
If you give me a short high-level introduction into where to start (as in which source file) and what to do there, I can try to write that function myself and then do a PR.
If mmg has a lot of internal state, it would be very useful/necessary to have an API function to clear that state.

As for angle detection: Peyré talks about the SDF in his tweet. Whether signed or not signed makes no difference in the interior. The distance function is not smooth on the medial axis, only (Lipschitz-)continuous, and by consequence, the level sets are not always smooth curves either.
Only outside the medial axis they are usually smooth. So, do you suggest to turn angle detection off just for the sphere example, or for SDF level functions in general, despite of that? To be honest, I always thought “angle” referred to interior angles of output tetrahedra. I’m only now vaguely understanding that it refers to curving angles of the level set, somehow.

Thanks for your very nice proposition of contribution but this workflow will only work in your specific case, where sharp angle detection can be enabled so it may be confusing for other people.
Moreover, I don’t think that it is clean to perform the cleaning of the previous level-set in the file parser (this treatment is coded there only because Mmg was originally developed as a stand-alone application).

I understand that passing through I/Os is annoying : what delay would be accetable to you for me to correct the problem?

Beside, thanks for the mathematical explanations!

The angle detection option in Mmg computes the angle between boundary triangles (even if triangles are not provided by the user or if they are at the interface between 2 domains as for the level-set case). Then it creates ridges if the edge at triangles interface creates a sharp angle (edge along which the surface is C0).
This option adds the sharp angle markers for the 12 eges of an input cube for example.

The level-set discretization option of Mmg was initially coded to shape optimization problems. In this case, the implicit surface defined by the level-set creates lot of spurious angles, so I am used to disable this option when discretizing level-sets (see the red lines on attached picture). 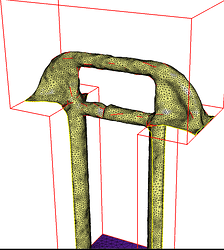 For your workflow, my opinion is that if you didn’t notice any troubles so far, don’t change anything to your code!